Good leadership can inspire, transform and provide meaning and purpose. Poor leadership can by contrast lead to disengagement, disappointment and distress. Followers have high expectations of those in leadership positions and are profoundly influenced by the style and character of those in charge. Consequently leaders exert a disproportionate influence over the satisfaction and engagement of their followers (Harter, Schmidt & Hayes, 2002). Given this level of influence and responsibility, no wonder some leaders ‘derail' and literally leave the path and fail to realise the potential that seemed so apparent in an earlier career stage. What proportion of leaders derail (i.e., are fired, demoted or fail to advance) and what is the impact of this on both themselves and their followers? Estimates vary but it seems that a significant proportion of people in leadership positions exhibit maladaptive behaviours to the point where the performance and wellbeing of themselves and those around them are adversely impacted. Managerial incompetence has been estimated at between 30-75 per cent in America (Hogan & Kaiser, 2005), and we can expect a reasonable subset to develop full derailment behaviour. Indeed McCall and Lombardo (1983) found that 25 per cent of individuals identified as having high potential derailed as they plateaued at lower levels than expected within the organisation.
Research is surprisingly sparse in this area but studies that have been done identify particular patterns of behaviour that reoccur in this context (see Table 1). However it must be emphasised that these are post-hoc descriptions of the maladaptive behaviour based on an implicit template of what it takes to be a successful and effective leader. Consequently the extent to which they explain derailment rather than just describe the symptoms is an unresolved question. For example, failure to build a team is a common symptom of derailment but this consequence could be explained by multiple causes, not all of which are in the leader's sphere of influence. None the less, it must be remembered that the impact of a misfiring executive is exponential as their dysfunction cascades directly down through their team, and indirectly through their reputation and the climate they create (Kaiser, Hogan & Craig, 2008).

A Taxonomy of Derailment

Broadly speaking there have been two contrasting approaches to the classification of derailment. The personality approach has attempted to describe maladaptive personality traits that, when combined with the right environmental catalyst, lead to derailment and reduced performance. This approach borrows heavily form the personality disorders literature, assuming that these maladaptive traits lie latent within the individual awaiting some activating event or stressor to become manifest. This is a person-centred approach where responsibility for management lies in the individual rather than the environmental or organisational challenges that they face. By contrast the organisational approach has been to classify business challenges like mergers and acquisitions that predisposed existing leaders to derailment. However this approach, whilst identifying commonalities in challenging business scenarios, says little about individual susceptibility to such environments (Finklestein, 2003). 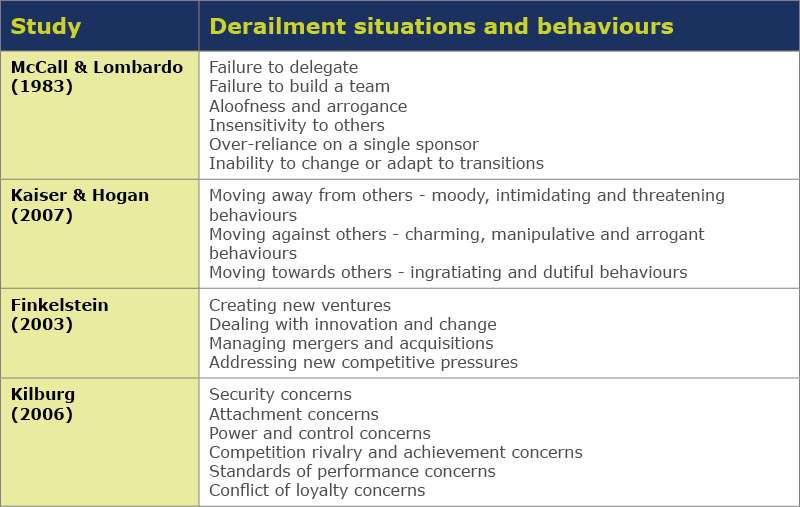 The personality tradition emphasises the individual traits and behaviours that are typically found in those occupying leadership positions. Kaiser and Hogan (2007) present the most sophisticated version of this approach, describing derailment characteristics as flawed interpersonal strategies that inhibit key organisational challenges such as building a team and gaining buy-in. Each of these 11 ‘dark side' tendencies has its origins in concerns over issues of security, recognition and approval, and the leader's subsequent over-reliance on a particular strategy to compensate for this. Interestingly, Kaiser and Hogan acknowledge that awareness of these traits does not predict the timing of derailment, just the susceptibility. Secondly, these traits are most apparent when situational constraints are at a minimum, suggesting an increasingly important role for strong corporate governance.
It seems entirely reasonable to propose that a combination of overly rigid psychological traits and behavioural strategies, combined with a demanding and challenging organisational environment, will lead to the expression of some derailment behaviours. Given that much less control can be enacted over the business environment, the key focus for successful management must be the enhancement of awareness and psychological flexibility within the leader.